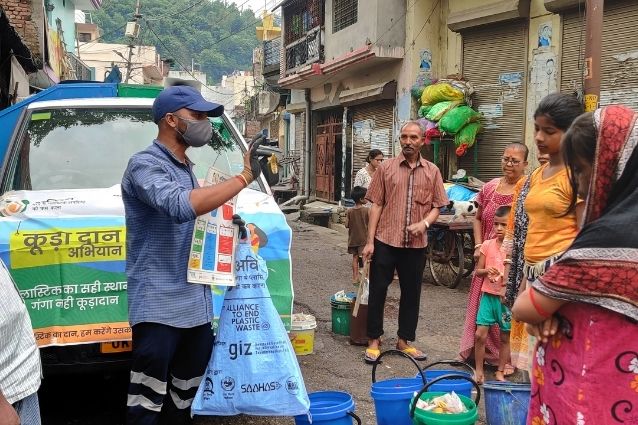 Setting the bar high for source segregation and recycling in Rishikesh


Imagine a cluster with 200 households, a narrow lane, people coming out of their houses to dispose of their waste and getting back to their daily work within seconds! Our team in Rishikesh chose a challenging and exciting location for the ‘kooda Daan abhiyaan or donate your waste campaign. With an encouraging display of community participation and the Aviral team’s rigour, the campaign in Bengali Basti managed to convince a total of 70 households out of 144 to segregate their waste before donating it to us!


“Donate your Waste” or “Kooda Daan Abhiyaan” is a flagship campaign under Project Aviral that promotes a circular economy in communities.  As part of this campaign, our team carries out interpersonal awareness sessions with each household in our pilot wards and informs residents about the possible recovery of resources from segregated dry waste. This campaign typically spans over 3-4 days and is divided into three stages i.e., first awareness sessions with households on source segregation of waste, second the commitment from households to segregate and store their dry waste, and third to donate their dry waste for recycling. 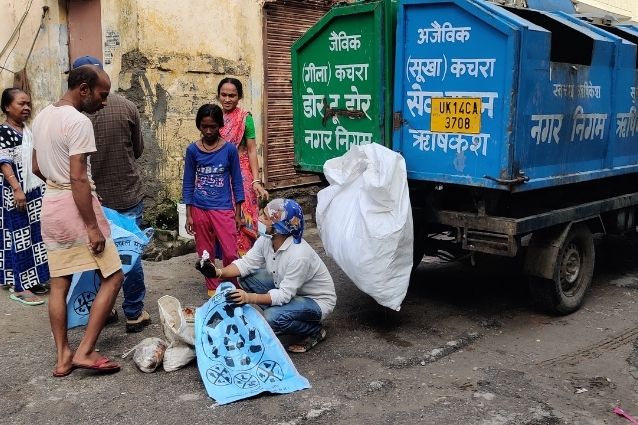 Between 21st to 23rd July, our team approached the residents of a densely populated, low-income residential area named ‘Bengali Basti’. With mostly packed houses, predominantly nestled in narrow lanes, it was a challenging task for the waste collection vehicle to reach every doorstep. The team also found that most households were disposing of their waste in a mixed form which makes recycling highly difficult.

The team came up with innovative methods to increase visibility and garner the attention of the Bengal Basti residents towards source segregation. We accompanied the collection staff and the collection vehicle which was used to spread awareness on proper disposal of waste through its loudspeaker.  In addition, demonstrations on source segregation were given by the Aviral team to residents who were handing over mixed waste as an existing practice. This dedicated intervention made the awareness drive more practical and effective. 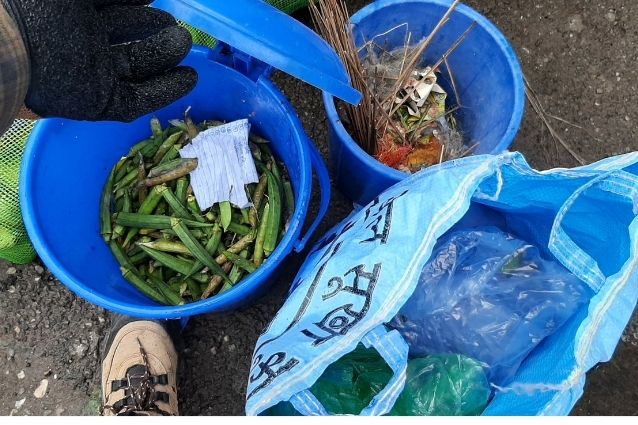 We distributed dry waste bags to 144 households out of which 70 households managed to segregate waste properly! We collected a total of 25 kgs of dry waste during this event and managed to achieve a 50% segregation rate, higher than usual, in Bengali Basti during the Kooda Dan Abhiyan campaign. We are confident that such initiatives motivate residents to properly manage their waste at home and contribute to a cleaner neighborhood and Ganga!

Celebrating Gandhi Jayanti by Plogging for a cleaner Ganga!
2021-10-02
Bringing together the Rishikesh Market Association for efficient waste management during ‘Azaadi ka Amrit Mahotsav’
2021-09-29
Paving the way for sustainable events in Haridwar through a Public Event Guidelines Workshop
2021-08-21
Celebrating Independence Day by raising awareness on source segregation through Nukkad Natak
2021-08-15
Raising awareness on source segregation in Hari Ki Pauri thorough street theatre
2021-09-10
Making public events more sustainable through proper waste management guidelines
2021-08-26
Celebrating Independence Day with a waste segregation event along with the Mayor and Municipal Commissioner
2021-08-15
Prioritizing the health of our frontline warriors in Haridwar through health camps
2021-08-05
Building a responsible model ward in Rishikesh to ensure source segregation
2021-07-29
Building capacities of Ward Councillors in Rishikesh and Haridwar for a cleaner Ganga
2021-07-14
Raising spirits and awareness on anti-littering through a Nukkad Natak at Triveni Ghat.
2021-04-09
Source segregation awareness and Kooda Daan Abhiyan conducted for 320 households in Haridwar's Ward 19
2021-08-31
Raising awareness and collecting 130 kgs of segregated dry and plastic waste in Rishikesh's Ward 5 and 6
2021-03-14
Collected and segregated 51 kgs of waste at the Bhandara Event, Harihar Mandir!
2021-03-14
Ringing in Basant Panchami with a Kooda Daan Abhiyan where 250 kgs of segregated waste was collected!
2021-02-10
Celebrating World Clean-up Day in Rishikesh!
2021-09-18
Ward no. 5 of Rishikesh comes together to celebrate their waste champions
2021-09-10
Waste generator trainings at Indira Basti and Shiv Mandir, Haridwar
2021-08-21
Young waste champions clean-up a dumping site in Rishikesh
2021-08-13
Bilkeshwar Temple manages its Bhandara waste sustainably with the help of Aviral
2021-08-24
Joining hands with Healing Himalayas to clean-up one of the largest dumpsites in Rishikesh!
2021-08-01
Setting the bar high for source segregation and recycling in Rishikesh
2021-07-23
House-holds and shops in Haridwar come together to donate dry waste
2021-07-23
Sparsh Ganga Volunteers Join Us to Clean Triveni Ghat in Rishikesh
2021-03-21
Aviral Discusses Menstrual Waste and it’s Proper Disposal on Women’s Day 2021
2021-03-07
Aviral Commences Training Of Municipal Waste Staff In Haridwar As Part Of Its Aim To Improve Occupational Safety For Waste Workers
2021-02-26
Aviral Provides Organic Holi Colors In Exchange For Waste To Residents In Haridwar As Part Of Its Ongoing Kooda Daan Abhiyan Campaign
2021-03-10
Aviral Commences On Ground Activities In Rishikesh With It’s First Community Plastic Waste Management Event In Rishikesh
2021-02-16
Aviral Celebrates Basant Panchami by Distributing Paper Kites in Exchange for Plastic Waste
2021-02-16